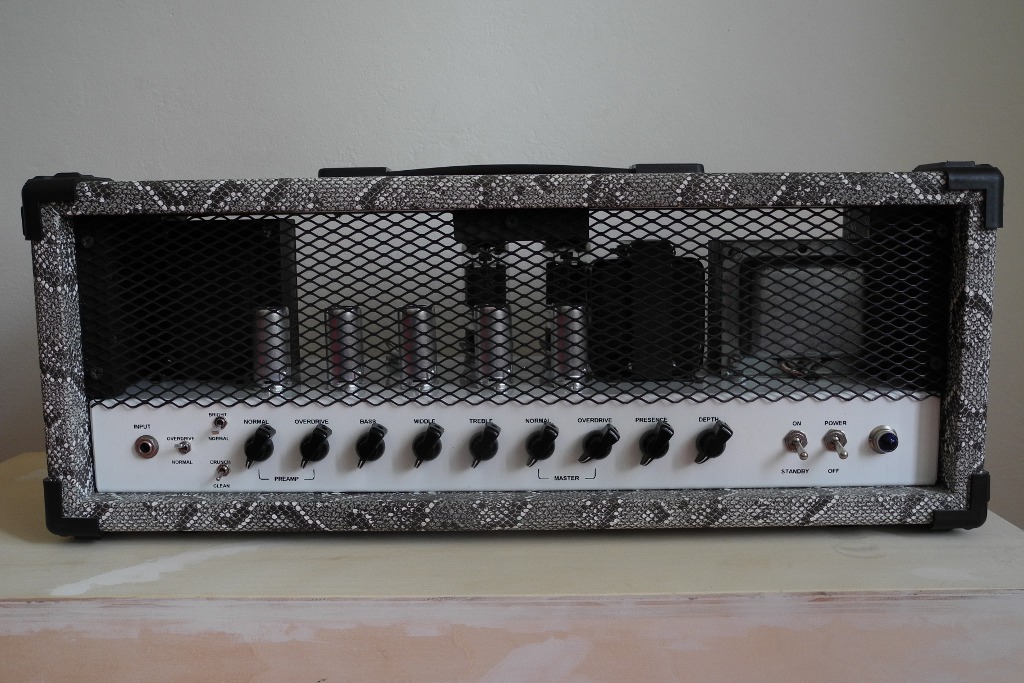 Soldano SLO-100 Clone
I actually built this amp in 2004/2005 but recently it went back on my workbench. As some of you might see, it's an Soldano SLO 100 clone - a very very popular guitar amp, first built in the 80s and often copied(and slightly modified) by other guitar amp manufacturers and DIYers since then. 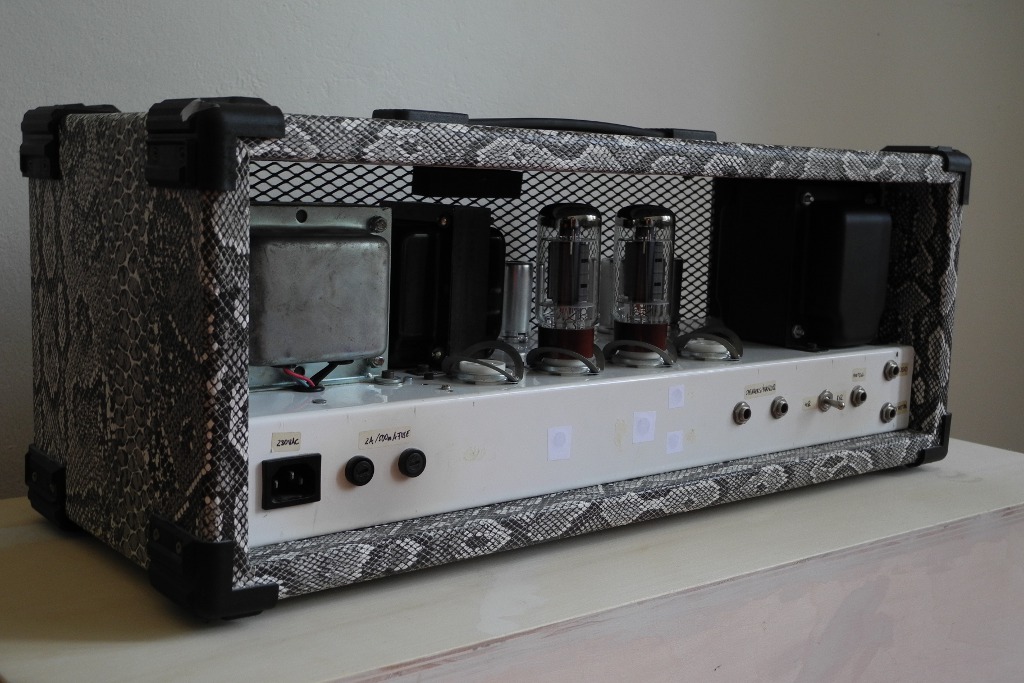 Backside of Soldano SLO-100 Clone
I modified this amp quite often over the years: I tried some variable power scaling stuff, modded the OD channel to all kinds of different sounds over and over again, messed around with the GND layout and stuff like that. Then it was standing in my room - unused - for the last few years, because I was more into drumming and besides that had other amps lying around, that I liked better for playing and recording - until now. It was time for a change, I wanted to use it to track some heavy rhythm guitars for a bunch of songs and maybe a solo here and there, so I took the whole thing apart and started to rebuild it from scratch. 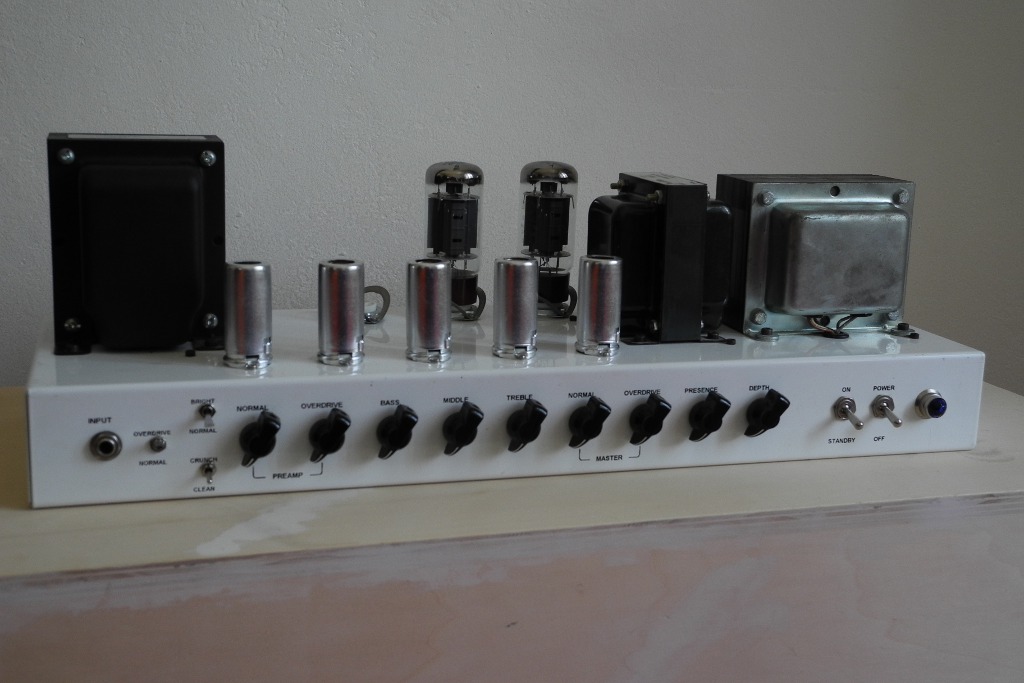 Soldano SLO-100 Clone chassis view
There's really nothing too special about this project. If you need some details on building one of those, you'll find plenty of information on the net. But here're some facts about mine anyway: I used a Hammond 1650T(actually for 4 EL34s) as output transformer, some large Hammond Choke(I think 10H 500mA) and the power transformer was custom-wound by IG-transformers(called "Shinrock" at that time). The chassis was from Weber USA, some cheap special offer, because they screwed up the powder coating and labeling. The large electrolytics are from F+T, the other caps are a mix of WIMAs, Orange Drops, Xicons and some Silver Micas. The pots are from Alpha and the jacks from Switchcraft. I mounted the power tube sockets wrong back when I first worked on it, so the poweramp wiring is not as perfect as in the original(I have no idea why I did that). The circuit is almost the same as in the original SLO, I think the only thing I changed is the C after V2a, which I changed from 22n to 4n7, which moves the cutoff-frequency from about 4Hz to 23Hz - doesn't look like it, but it tightens up the low end just tad. 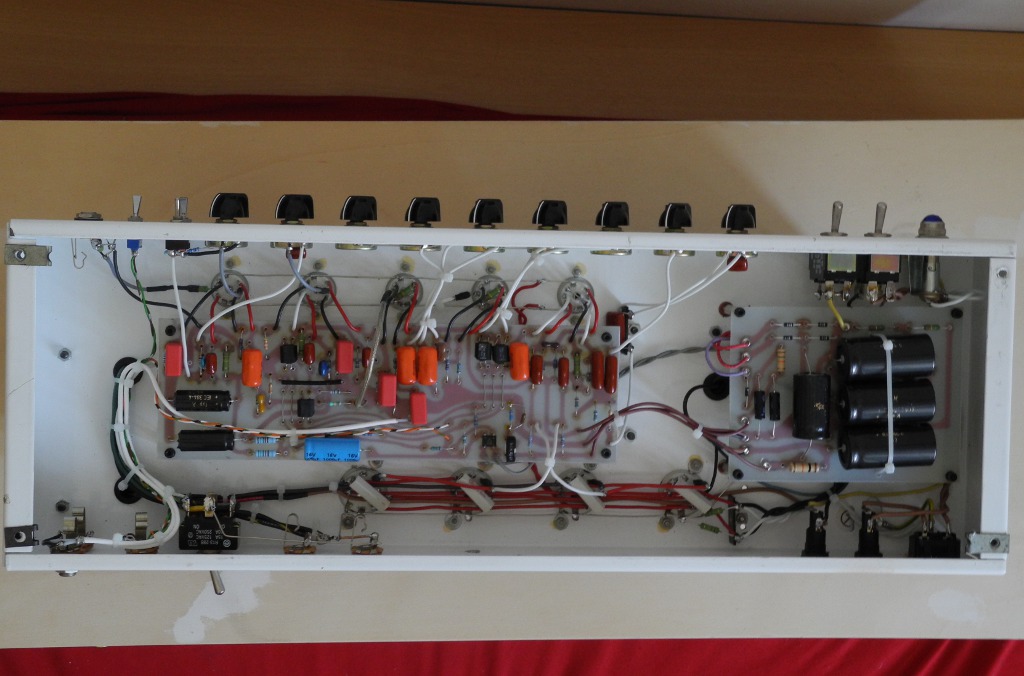 Soldano SLO-100 Clone insides
I currently run the amp with only two 6L6GCs, that saves money and gets me more than enough output for recording and it sounds absolutely great. Maybe I'll be able to record some sound samples during the next session.

Again, thanks for reading